Everyone knows that by continuously ignoring the plight of the Rohingyas of Myanmar (Burma), the governments of the ASEAN nations, ours included, are singly and collectively guilty of abandoning them to a fate worse than death. 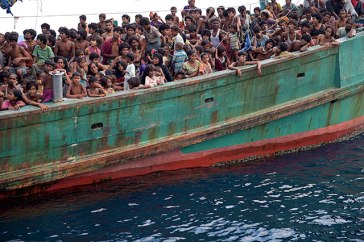 Already, the Rohingyas have been rendered stateless, with both the Burmese and Bangladeshi governments disowning them as being mere “illegal immigrants,” conveniently denying the fact that they had been living in those countries for several generations already. In Myanmar, the situation is much more dire — not only are they not considered citizens, they are also continuously subjected to cultural and religious persecution. Also, they are denied access to such basic Human Rights as education, freedom of movement, and basic government services.

Is it any wonder then why the refugees would choose to gamble with their lives, and the lives of their children, and place themselves at the mercy of human trafficking syndicates just to escape their desperate situation in Myanmar?

But now they find themselves in an even worse situation — abandoned by the human smugglers, their boats left adrift at sea. With food and water dwindling fast, the inevitable happened. People driven mad by hunger and thirst fell upon one another, killing their fellow refugees for the remaining supplies.

Normal people, when confronted by such a dire situation, would immediately think of ways to help the victims, and fast.

But, apparently, governments are a different breed. Instead of rescuing the Rohingya, they refused them entry. Instead of towing them to shore, they pushed their rickety boats back out to sea.

“Not our problem,” they said. “We are victims too” (of illegal immigration), they cried.

To which we, their constituencies — the people who voted them into office — can only reply, “governments that do not represent the sentiments of their own people are not worthy to remain in power.” 😦

Like Ikinakarga...
The persecution of the Rohingyas — ASEAN’s collective shame.

6 thoughts on “The persecution of the Rohingyas — ASEAN’s collective shame.”